E-waste is one of the fastest growing waste streams in developed as well as developing countries. The decreasing life-span of products such as computers and mobile phones has reduced significantly in developed countries, subsequently increasing the amount of e-waste generated per year.

o    The estimated value of raw materials in e-waste stands at roughly 55 billion euros, which is more than the GDP of most countries in the world

o    The United Nations has engaged in over 150 projects, publications, reports and programmes since the year 2004

As a response to the global e-waste challenge, an increasing number of initiatives from international actors have been established, including work by the United Nations.

The EMG’s Issue Management Group on Tackling E-waste published the report  United Nation’s System-wide Response to Tackling E-waste (2017), highlighted the need for strengthened collaboration among United Nations organisations, with over 20 organisations active in tackling e-waste and over 150 e-waste initiatives having been undertaken since 2004. The report offers recommendations on maximizing system-wide coherence towards a life-cycle approach to tackling e-waste.

In March 2018, a non-binding Letter of Intent was signed by seven organisations from the United Nations system, active in addressing the global e-waste challenge. This Letter serves as a basis for coordination and collaboration on United Nations system-wide support for e-waste management and the creation of an E-waste Coalition. In April 2019, three more UN agencies joined the Coalition by signing the Letter of Intent. 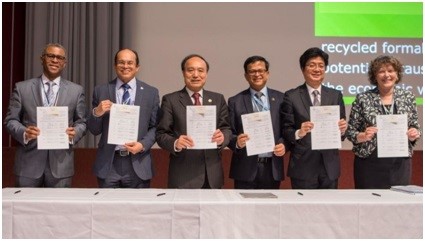 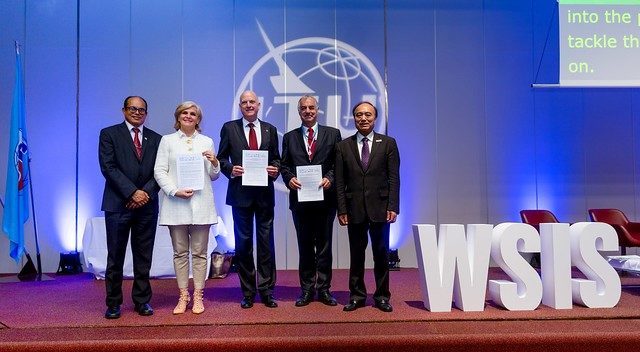 The E-waste Coalition is currently being shaped in line with the Letter’s aims of committing to increased collaboration, building partnerships and supporting Member States to address the global e-waste challenge.

Three core functions of the Coalition are envisaged: advocacy including awareness raising and campaigns; knowledge and best practice sharing including through the website globalewaste.org; and the development of a joint intervention model for the implementation of e-waste work at the country level.

Addressing the e-waste challenge requires collaboration among a multitude of stakeholders across the life-cycle of electrical and electronic equipment. The signatories of the Letter of Intent are working with entities such as the World Economic Forum and the World Business Council for Sustainable Development to encourage a circular economy for electrical and electronic equipment.

The report A New Circular Vision for Electronics – Time for a Global Reboot was released at the World Economic Forum’s annual meeting in Davos in January 2019 as a collaboration between the E-waste Coalition, the World Economic Forum and the World Business Council for Sustainable Development. The report compiles data and research from throughout the UN system to make the case for a new vision and describes and analyses challenges and opportunities, laying the groundwork for the process of systemic change. Collaboration continues to further develop this new vision with the purpose to align all the relevant United Nations entities, key governments and some of the largest electronics multinationals around a common plan for the future of the electronics sector based on the principles of the circular economy.

To find out more or to become involved, please contact the EMG Secretariat at emg@un.org.