Rescuing the world’s oceans from the triple planetary crises of climate change, biodiversity loss and pollution will require ambitious action by governments, industry and civil society around the world.

Recognizing that the causes of and solutions for these three crises are intertwined, the United Nations (UN) has produced a new assessment of existing global efforts, initiatives and opportunities for tackling the crisis of pollution, with a focus on litter and microplastics that end up in the oceans. 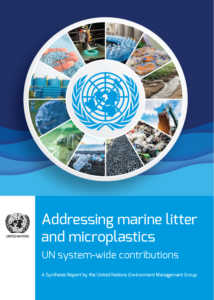 The report calls for enhancing collaboration across the entire life cycle of plastics and other products in order to address marine litter in a systematic way. It specifically calls for promoting sustainable production and consumption to ensure that materials are retained in the economy for as long as possible and at their highest economic value. Other essential actions are implementing the source-to-sea approach across the life cycle of products and as they transit different environmental media (freshwater, land, air and seawater) and strengthening waste management and recycling to reduce the production of plastic and other goods in the first place.

These actions could be promoted through a global vision agreed at the highest possible level, such as at the UN Environment Assembly (UNEA) or the UN General Assembly. Given the prominent role of the UN system in leading and hosting relevant initiatives, treaties and projects, expanding UN system-wide collaboration and expertise through a more integrated inter-agency approach would have a major impact.

Produced by the UN Environment Management Group, the report responds to a request by UNEA for a detailed mapping of all relevant UN initiatives and sources of expertise. In February and March, UNEA will consider a resolution on launching talks for a global instrument on marine litter and plastic pollution.

Over 40 UN entities are supporting Member States in reducing and addressing marine litter and microplastics. Some UN bodies have explicit mandates in this area and/or conduct major activities that directly benefit the marine environment. Others have more indirect remits for addressing marine litter that derive from their work on green economy, climate change, international trade or humanitarian issues. The UN’s portfolio of activities also features several joint projects and initiatives.

The UN System possesses considerable expertise across a range of relevant disciplines, including on how to address the key drivers of pollution such as product design, industrial production and consumption patterns; how to identify impacts on marine areas, rivers and land; and how to avoid littering through improved waste management and recycling.

In addition to supporting Member States and reducing the plastic footprint of its operations and facilities, the report suggests that the UN System should consider expanding existing and building new alliances with stakeholders. A wider range of disciplines should be engaged, including industrial sectors. Data, indicators, monitoring and knowledge all need to be improved in order to facilitate and track global progress.